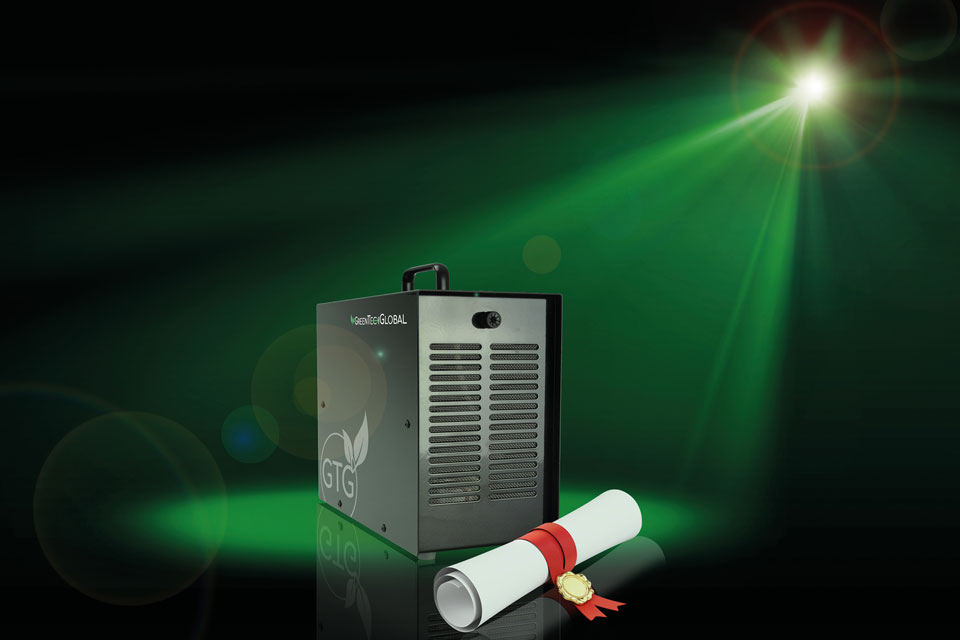 CASE STUDY: How trioxygen is cleaning up on campus

A new generation of powerful deodorisers and sanitizers is helping clean up on campuses across the UK.

The Gteck range from Oxford-based Greenteck Global is harnessing the power of trioxygen – and elemental force as old as the planet itself – to provide high-tech cleaning solutions for the 21st Century.

Trioxygen, or ozone (O3) occurs naturally in our atmosphere, most noticeably in the Ozone Layer high above the Earth’s surface, and is produced by lightning over the oceans. People visiting the coast often say they can ‘smell the ozone’.

The Gteck units use UV light to produce trioxygen in carefully controlled amounts and rates. The extra electron in the oxygen (O3) ‘attacks’ odours, grease, mould spores and even smoke damage.

But at the end of the process the O3 simply decays back to normal oxygen (O2). So as well as providing significant cost-saving benefits compared with using traditional, aggressive, chemical cleaning methods, the Gteck system is safe, easy-to-use and environmentally friendly.

Greenteck Global produces a range of units from one small and simply enough to plug in to a standard electrical socket to provide constant background deodorising to the powerful 64 g generator that can be used for ‘shock-treatment’ in a particularly badly affected room /location.

There is also a Gteck Destruct unit: fully compatible with the generators; that will operate automatically at the end of a cleaning cycle to neutralise any unused trioxygen.

In addition to the standard deodorising / sanitising the units can also be installed with – or retro-fitted to – extraction systems in commercial kitchens to degrease and remove cooking odours.

For universities and colleges one of the main uses for trioxygen is in student accommodation / halls of residence.  This is especially true at this time of year when cold, wet, weather means the heating is turned up, windows are kept closed, dirty, wet, clothing is often left piled in corners and so mould and odour are almost perennial problems.

Over the past year Greenteck Global has sold / installed units to universities up and down the country, including: Cardiff, Leeds, Manchester, Oxford Brookes, Royal Holloway University of London, Falmouth and Optivo Welkin Halls of Residence Eastbourne.

From Manchester Emily Taylor, Deputy Head of Facilities Management, commented: “The Aura unit really helped us manage the smell from two heavily used toilets in an awkward area: where nothing else we tried eliminated the nasty smells.  Everyone has commented on the genius system.”

While David Thurston, founder and head of Greenteck Global added: “Following on from participating at the CUBO summer conference last July, we have had a fantastic response from a number of universities.  Initial site trials have now concluded with our ozone units being deployed permanently.

“Ozone now plays a major part in day-to-day housekeeping regimes and we have proved that ozone is a far more affective on all malodour issues from student life-style to mould and wash room related odours.

“We are extremely pleased with the response so far and continue to get fresh enquiries from Universities battling with the extract same issues. We continue to support the university sector with our products and services and welcome fresh enquiries to trial our systems.”